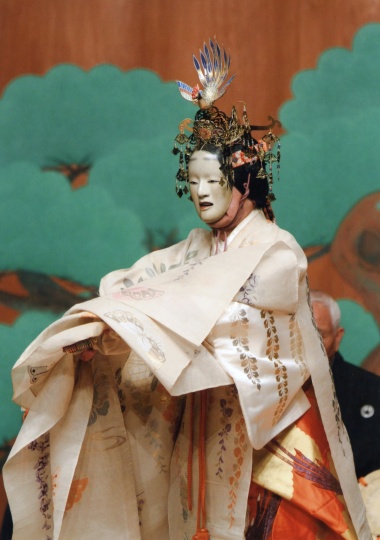 At Newark airport boarding my flight back to Chicago, I studied an old copy of Arthur Waley’s The No Plays of Japan (Grove Press, 1957, priced at $1.95). I was still trying to get my mind around what I had witnessed at the Lincoln Center Festival the night before: Kanze Noh Theatre’s “Okina” and “Hagoromo.”

The Kanze Noh Theatre is a family-run company as old as Noh. Its present grandmaster Kiyokazu Kanze descends directly from the great Zeami and his father the medieval founder of Noh. The evening’s first piece “Okina” was a dance music religious ritual, highlighted by the donning of the mask of the diety. This ritual did indeed seem to me to summon to the room where the traditional wooden theatre had been constructed, some sort of uncanny presence. I don’t know what the feeling was precisely, but I might call it “sacred.” The second piece, the Noh play “Hagoromo,” written by Zeami himself, enacts a humble fisherman’s encounter with an angelic being. The fisherman finds the angel’s feathered robe, returns it to her, and she dances for him. The story’s moral, I think, concerns art. The elements, the objects that comprise beauty — the masks, the costumes, the instruments, and stage — ought not be of mere antiquarian or curatorial interest. These things don’t even belong to us, they are not museum pieces or family heirlooms or national treasures to be hidden away or even displayed. They are meant instead for the “gods,” whom we encounter through the experience of art. So the angel takes back her treasure, puts it on, and in gratitude gives the fisherman and all of us mortals in the audience her dance. Our happiness lies not in the possession of any precious object but in the epiphanic experience, catching a fleeting glimpse of the angel’s transcendent beauty. Anyway, this is what I was thinking about during the dance.

During the dance, there were moments to think. Without actually being tedious, there were times when my attention wandered between drum beats, but then there were also moments when the angel stepped forward and her face — a mask — seemed to come alive, to be peering out from the stage, appealing to us in the audience. It wasn’t that there was somebody  (the actor) staring from behind the mask. It seemed as if the angel lighted her sleeve and rose, almost floating, and the mask itself shone with a kind of celestial light and offered a sort of otherwordly regard. The weirdest moment, however, was when the angel danced back to the bridge to exit and seemed, after spinning countless times (I had lost track of time), about to depart. I suddenly felt strongly that I did not want her to go, although I was tired, and thirsty, and maybe even a bit bored. It was strange but it seemed that in her retreat she appeaed even more remarkable. I heard in my own mind, myself saying, “Oh, no, don’t go.” And as if the angel heard me — although of course it was all a part of Zeami’s choreography, choreography that is more than half a millenium old — she paused, did a few more steps as if bestowing a final gift, then exited.

Walking out of the theatre, I didn’t know what to make of it. The next day at the airport I was still wondering. But then flipping to an appendix of Waley’s collection, I found a letter written in Japan in 1916 from the Austrian arist Oswald Sickert, describing his experience of a Noh performance of this same “Hagoromo.”

“The best single moment I have seen was the dance of thanks to the fisherman who returns to the divine lady the Hagoromo, the robe without which even an angel cannot fly. […] The divine lady returned on her steps at great length and fully six times after I had thoughtI could not bear it another moment. She went on for twenty minutes, perhaps, or an hour or a night; I lost count of time; but I shall not recover from the longing she left when at last she floated backwards and under the fatal uplifted curtain. The movements, even in the dance, are very restricted if one tries to describe or relate them, but it may be true, as they say, that the No actor works at an intense and concentrated pitch of all his thoughts and energies, and this tells through his impassive face or mask and all his clothes and his slow movements. Certainly the longer I looked at the divine lady, the more she seemed to me to be in action, though sometimes the action, if indeed there was, was so slight that it could only be that she had worked us up to the fine edge of noticing her breathing. There was only one memorable quick motion in the dance, the throwing of the stiff deep gauze sleeve over the head, over the crown with its lotus and bell tassels. My wife has no inclination to deceive herself with the fascination of what she can’t explain, and she agreed that this was the most beautiful thing that had ever been seen.”

Reading this, the hairs stood up on the back of my neck. This was exactly my experience the previous night, yet it was written one hundred years ago.

CHORUS: “But, as the Hours pass by,/ Sky-cloak of feathers fluttering, fluttering/ Over the pine-woods of Mio,/ Past the Floating Islands, through the feet of the clouds she flies,/ Over the mountain of Ashitaka, the high peak of Fuji,/ Very faint her form,/ Mingled with the mists of heaven;/ Now lost to sight.”